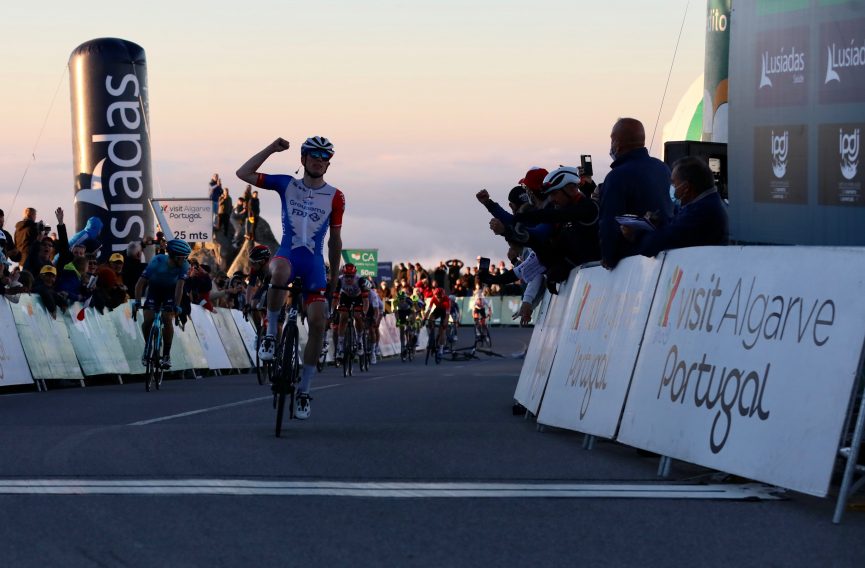 First test of the season, first victory. David Gaudu wasted no time in opening the count in 2022. He is starting the season in the 48th edition of the Volta ao Algarve and has added his name to a growing list of prestigious winners in Alto da Fóia. The Groupama-FDJ frenchman is also the new leader, but just a second separates him from six riders.

It was an exciting finale, very well prepared by Gaudu’s team. Stefan Küng was extremely important, although, before it was INEOS Grenadiers that imposed a very strong pace for a long time. Still on the way up to Picota, the british team completely broke the peloton, in addition to ending the breakaway.

The second category ascent prepared the show for Fóia. Geraint Thomas – a two-time winner of the Volta ao Algarve – was the first to set a high pace that never slowed down until de finish line. In front was a group with practically all the main GC contenders. INEOS Grenadiers had almost all riders up front (four endend in the top ten), Groupama-FDJ had a perfect Küng supporting Gaudu, in addition to Sergio Higuita (Bora-Hansgrohe) and Tobias Foss (Jumbo-Visma) always well placed.

These two cyclists didn’t had a good finish. Before, Frederico Figueiredo (Glassdrive/Q8/Anicolor) tried to surprise, but the two World Tour teams mentioned did not allow surprises. After the turn that left the finish line at Fóia in sight, Foss and Higuita touched and fell. Gaudu was not scared, showing that, at a time when the Groupama-FDJ asks him to start taking more and more leadership of the team in the big competitions, he is working towards the main goals with motivating victories.

In addition to being his first win on the second day of competition in 2022, Gaudu highlighted the importance of also opening the Groupama-FDJ count, which, until Fóia, was at zero this season. Gaudu praised the work of the team, especially Küng, and showed that the ascent to Fóia was well studied.

“I wanted to be at the front, I know the sprint is fast,” he said, referring to how the headwind and then the crosswind made the stage difficult. Despite the triumph and wearing the Yellow Jersey Turismo do Algarve, the 25-year-old frenchman does not assume that he will try to win the general classification.

History in Fóia has recently been made with victories by World Tour cyclists. Some already outstanding, others at the beginning of a great career: Tadej Pogacar and Remco Evenepoel, for example. Gaudu is yet another youngster to win, but before that, the protagonists of the second stage were others.

However, the peloton didn’t give it a chance and the breakout dind’t even stay in front at Picota (second category at 167.3 kilometres). Matias tried hard, but conquering Fóia earned Gaudu the lead on the mountain. Even so, Matias will leave this Friday in blue, albeit on a “loan”, having one point less than the frenchman.

Fabio Jakobsen and Remco Evenepoel, both from Quick-Step Alpha Vinyl, maintain the lead in points and youth, respectively. In other words, they wear the Green Credit Agrícola Jersey and the White IPDJ.

Great fight for the GC

Tony Gallopin (Trek-Segafredo) is eight, Thomas Pidcock and Dylan van Baarle, both of INEOS Grenadiers, are 17 and 18 away from the leader.

If this Friday the longest stage of the Volta ao Algarve (211.4 kilometers between Almodôvar and Faro) is again for sprinters, Saturday there will be a time trial of 32.1 kilometers and Sunday, Malhão will decide the champion.