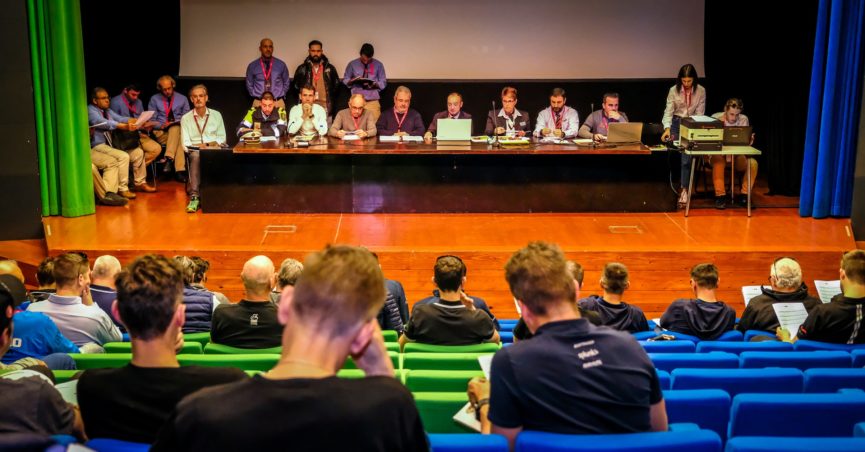 The 46th edition of the Volta ao Algarve Cofidis, from 19th to 23rd February, has 24 from Top-100 World Ranking riders. The race keeps the mountain stages, in Fóia and Malhão, and the Lagos and Tavira rapid finishes. On Sunday, Lagoas’ time trial closes the race.

From Wednesday to Sunday, olympic champions, world champions and “stars” from the top-100 of the world ranking will ride through the Algarve roads, in the 46th edition of the Volta ao Algarve Cofidis. The race, which is part of the UCI ProSeries calendar, has five stages – a total of 771.4 km – and, this year, the time trial is scheduled for the last day, which has not happened since 2012.

The startlist, which was updated today in Portimãos’ Museum Auditorium, confirms the previously announced stars, with natural emphasis on the debut in the of the Italian Vincenzo Nibali (Trek-Segafredo) in the Algarve, winner of the “triple crown” of cycling – Tour, Giro and Vuelta – and the return of Welsh Geraint Thomas (Team INEOS), winner of the 2018 edition of the Tour de France. Before that, two victories in the Algarve (2015 and 2016). In the list of previous winners of the race, the Polish Michal Kwiatkowski (Team INEOS), winner of the 2018 edition, will also participate in this edition of Volta ao Algarve.

With 24 riders from the worlds’ Top-100 – the best ranked being the Olympic champion Greg Van Avermaet (CCC Team), on the sixth position – and multiple world champions. Also, under the medias’ eye in 2020 edition, will be two of the most famous rising stars of the international scene, Dutch Mathieu Van Del Poel (Alpecin-Fenix), 12th on the World Ranking, and belgian Remco Evenepoel (Deceuninck – Quick Step), 28th. The presence of the young riders, 25 and 20 years old respectively, marks the expectations of a race that last year established another rising sensation, the Slovenian Tadej Pogacar.

In the 25-team squad – 174 runners – Team INEOS (ex-Team SKY), winner in three of the last five editions, will be in the spotlight with a line-up that has Geraint Thomas, Michal Kwiatowski and the Australian Rohan Dennis, time trial world champion. Another big name is the Colombian Miguel Ángel López (Astana), former third-place finisher in Giro d’ Italia and Vuelta a España.

Prestige Award
The organisation decided to give the Prestige Award to Vincenzo Nibali, recognising the unique curriculum of the Italian rider. The ceremony will be held at the start of the second stage, in Sagres.
Vincenzo Nibali is one of the only two active riders who already won The Tour de France (2014), the Giro (2013 and 2016) and the Vuelta (2010). In addition, he has won two monuments, Milan – Sanremo (2018) and Il Lombardia (2015 and 2017), and has more than half a hundred victories.
In the past, the prestigious award was given to Philippe Gilbert, Tony Martin, Tom Boonen, Alberto Contador and Fabian Cancellara.

First is for the sprinters
This is how the first stage of the competition, between Portimão and Lagos (195.6 km), is expected to be concluded. The meeting point will be at the riverside area of Portimão – the stage for the teams’ presentation, from 10.45 am – before the symbolic start scheduled for 12.00 pm. In a 2500-metre uphill stage, the caravan has mountain passes at Picota (km 62, 13h40) and Santa Luzia (78 km, 14h01). The sprints will be in Loulé (14h00), São Bartolomeu de Messines (14h50), and Odiáxere (16h00). The finish is in Lagos, Avenida dos Descobrimentos, at 4.50 pm. In the squad’s list of sprinters for the 2020 edition of the Volta ao Algarve Cofidis, the names of Elia Viviani (Cofidis, Solutions Crédits), Fabio Jakobsen and Florian Senechal (Deceuninck – Quick Step), Alexander Kristoff (UAE-Team Emirates), Matteo Trentin (CCC Team) and Mathieu Van Der Poel (Alpecin-Fenix) stand out.

When will the parcours be known? I would like to go see the stages on 20th and 21st of February...

Sadly I will not be able to make it to the Algarve this year but hope the race continues and will be watching on tv . Good luck and stay safe.

So so hope we'll be able to be there again next year! just made it this year before everything went very wrong! x