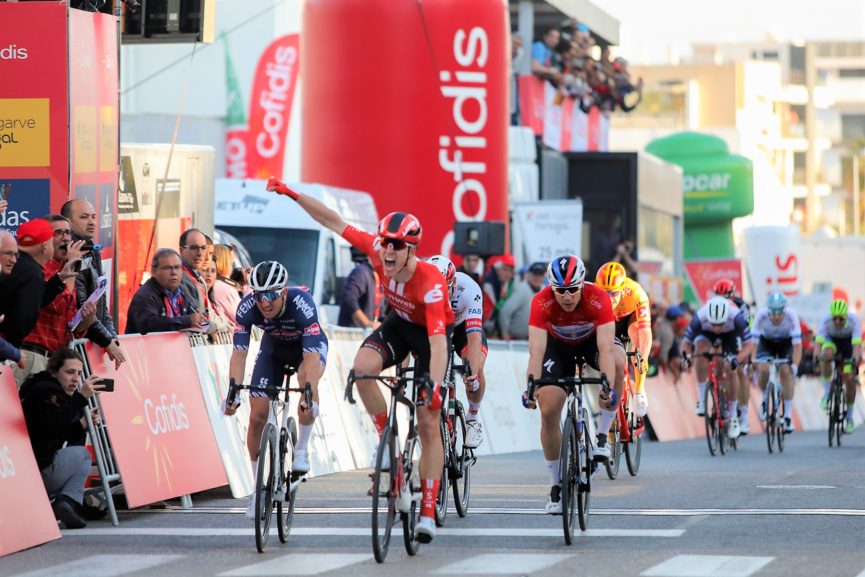 The Dutchman Cees Bol (Team Sunweb) won today the third stage of the 46th Volta ao Algarve Algarve Cofidis, imposing himself with a powerful sprint, after 201.9 km between Faro and Tavira. The Belgian Remco Evenepoel (Deceuninck-Quick-Step) keeps the Yellow Jersey Visit Algarve.
In the longest stage of the competition, Gotzon Martín (Fundación-Orbea), Aleksandr Grigorev (Tuna General-Tavira-Maria Nova Hotel) and Tiago Antunes (Efapel) showed no fear of the distance and left the peloton with only 3 km covered. The peloton authorized all three to play the role of animators of the day but kept them at a recoverable distance. The end of the adventure would happen 19 kilometres from the arrival.
The expected script was fulfilled. The thousands of spectators who stood on the straight of the finish line watched an exciting sprint. Cees Bol gave the competitors no chance. He was the first to start, 200 meters from the finish line, and he didn’t let his rivals take away his triumph.
Team Sunweb’s speedster cut the finish line in 5h00m51s, relegating Italy’s Sacha Modolo (Alpecin-Fenix) to second and Dutchman Fabio Jakobsen (Deceuninck-Quick-Step) to third.
“I’m super happy with this victory. Winning here was a team objective. We took over the race at the end and my Team Sunweb colleagues were exceptional in putting me in a good position for the sprint. It wasn’t a stressful stage, on the contrary, you could even enjoy the sun. It’s my first race of the year and winning gives me confidence for the next goals. Next week I will race Kuurne-Bruxelles-Kurne and so winning here is a sign that I’m doing well”, said the winner of the day.
It was a day of transition in the fight for the overall qualification. Remco Evenepoel continues to wear the Yellow Jersey Visit Algarve, being followed by the German Maximilian Schachmann (Bora-hansgrohe), with the same time. The Irish Daniel Martin (Israel Start-Up Nation) is third, at 2 seconds, the same disadvantage as Rui Costa (UAE Team Emirates), fourth, and Tim Wellens (Lotto Soudal), fifth.
Remco Evenepoel is also the owner of the Lusíadas Blue Jersey, from the mountain, and White IPDJ, from youth. Teammate Fabio Jakobsen wears the Red Cofidis Jersey from the points classification. The only lead that escapes Deceuninck-Quick-Step is the team classification, topped by Astana Pro Team.
“It was a day for sprinters, so it wasn’t decisive for me. It was important to preserve the yellow jersey and try to put Fabio [Jakobsen] to discuss the stage. In the final part, for the last three kilometres, I chose not to take any risks and I preserved myself in the squad. Tomorrow, in Malhão, the race will be different and we will only have to defend the jersey. None of the rivals in the general classification will be able to escape, that will be our task: to defend the leadership”, said Remco Evenpoel.
The fourth stage, to be played this Saturday, will be the best opportunity to try to dethrone Remco Evenepoel from the top of the overall standings. The 169.7 kilometre stretch between Albufeira and the top of Malhão, in the municipality of Loulé, is the opportunity for the climbers to distance themselves from Evenepoel, European time trial champion.
The journey begins at 12.30pm at Albufeira Town Hall, and is scheduled to end at 5pm on the iconic second category mountain. Before the decisive climb, the runners will overtake the third category climbs at Picota (km 66, 2.14pm), Barranco do Velho (km 104, 3.08pm), and Alte (km 132.2, 3.48pm). The first pass at Malhão, 24 km from the end, happens at 16h08.
COMPLETE RESULTS