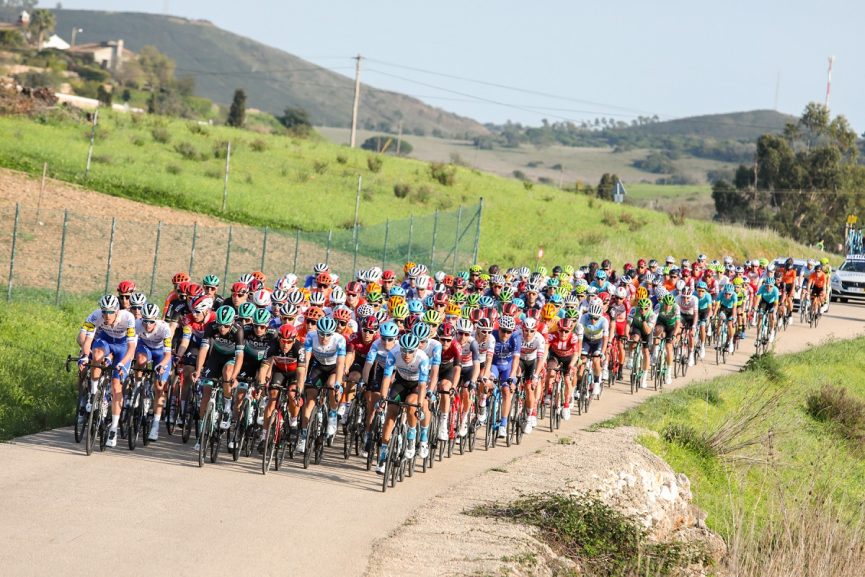 The 47th Volta ao Algarve starts this Wednesday with a stage that is expected to be decided on a sprint in Portimão. The main candidates for the general classification already have their eyes set on the second day, which will end in Fóia. Right from the start, there are big names of international sprint to follow closely. This is the case of Sam Bennett (Deceuninck-Quick-Step) and Pascal Ackermann (Bora-Hansgrohe). Among the men who can be protagonists in Fóia Rui Costa (UAE Team Emirates), Lennard Kämna (Bora-Hansgrohe), and Iván Ramiro Sosa, the last-minute novelty of INEOS Grenadiers, all stand out.

The fastest cyclists will be called upon to show their abilities right at the opening stage, 189.5 kilometers, between Lagos and Portimão. Sam Bennett, the most victorious sprinter of 2021, and Pascal Ackermann, one of the greatest references among the sprinters of the WorldTour, are the main candidates to triumph in Portimão and to wear the first Turismo do Algarve Yellow jersey of the competition. But the opponents won’t be easy to beat.

The Polish cross-country champion, Stanisław Aniołkowski (Bingoal Pauwels Sauces WB), is one of the sprinters in the best shape this season but is still chasing his first triumph of the year. The British Ethan Hayter (INEOS Grenadiers), the Dutchman Danny van Poppel (Intermarché-Wanty-Gobert Matériaux), the Spanish Jon Aberasturi (Caja Rural-Seguros RGA), the Romanian Eduard Grosu (Delko) the Frenchman Marc Sarreau (AG2R Citroën Team), and the South African Ryan Gibbons (UAE Team Emirates) are the other riders with good sprints and who could have a say in the arrivals in Portimão and Tavira.

It will also be interesting to see what role the twins Ivo and Rui Oliveira will play in the dynamics of UAE Team Emirates for the peloton finishes, as well as the role that the fastest cyclists of the national peloton will play such as Leangel Linarez (Tavfer-Measindot-Mortágua), César Martingil (Atum General-Tavira-Maria Nova Hotel) or Rafael Silva (Antarte-Feirense).

Once the thrill of speed expected in Portimão is over, it will be time to look at the general candidates, as the second stage, connecting Sagres, in the municipality of Vila do Bispo, to the top of Fóia, municipality of Monchique will be a test to the physical shape of all those who have the ambition to fight for the final victory.

Colombian Iván Ramiro Sosa will have to give his best as a world-class climber to confirm his favoritism. Rui Costa and Lennard Kämna, capable of good performances in the mountains and the time trial, are also in the front line of the predictions for the overall. It will also be important to see how the Danish champion, Kasper Asgreen (Deceuninck-Quick-Step), will face the climb to Fóia. If he holds up with the best climbers or even if he loses little time, he will be a candidate to win the Volta ao Algarve since he has in his favor the time trial of 20.3 kilometers in Lagoa on the fourth day.

The peloton also includes climbers who have proven themselves over the years, some of whom have made significant achievements in recent weeks. This is the case of the recent winner of the Tour of Turkey, José Manuel Diáz (Delko), or two riders who fought with the best in the climbs of the Comunitat Valenciana, Élie Gesbert (Team Arkéa-Samsic) and Rémy Mertz (Bingoal Pauwels Sauces WB), third place on Sunday in the Arrábida Classic.

Diego Rosa (Team Arkéa-Samsic) and Odd Christian Eiking (Intermarché-Wanty-Gobert Matériaux) are other quality climbers, as well as some riders from the national peloton, who will certainly enter the final top 10. In this aspect it’s worth mentioning the W52-FC Porto group composed by Amaro Antunes, João Rodrigues and Joni Brandão, but also Frederico Figueiredo (Efapel) or the Tavfer-Measindot-Mortágua duo, Tiago Antunes and Joaquim Silva, that has been doing so well in the last Portuguese races.

An open race is expected, with a wide lot of quality riders, who will give a show to the sports lovers who will follow the race around the world. Eurosport 1 will broadcast the last hour and a half of each stage to Europe, Asia, and the Pacific. Colombia, a country with a great passion for the sport, can watch the Volta ao Algarve on the Win Sports chain. Sky is broadcasting in New Zealand and GCN is broadcasting in all places with Internet access.
In Portugal, the broadcasting is assured, daily from 4:30 pm, on CM TV and Eurosport 1.