Who will be the new winner of the Volta ao Algarve? There is only one guarantee. Who ever wins, it will be the first time. This Sunday, in Malhão, an unprecedented champion will be crowned. Ethan Hayter (Ineos Grenadiers) has the advantage, but in a steady up and down stage, mainly from the 65 kilometers mark and with the rain threatening to make an appearance, after some very hot days, the recipe for an unpredictable day.

The stage has characteristics that are very reminiscent of a Ardenne classic and with such a wavy terrain, those who aspires the yellow jersey, the podium, the top 10, the stage win, will face 170.1 kilometers that will test the physical form of each one. There will be 3280 meters of accumulated to face. And in this short stage, which will start from Albufeira, the pace is often high.

The last hour will be a succession of demanding climbs, before the short but tough ascent to Malhão (2.6 kilometers with an average slope of 9.2%, which this year will only be face once. The rest of the climbs are in Vermelhos (3.2 km 5.9%, 43.1 km from the finish), Ameixeiras (1 km at 14%, 32.2 km from the finish line) and Alte (2.1 km at 5%, 14 km from the end). Before reaching these climbs, the peloton will “heat up” in Picota and Barranco Velho, also third categories. Only Malhão is a second category climb. 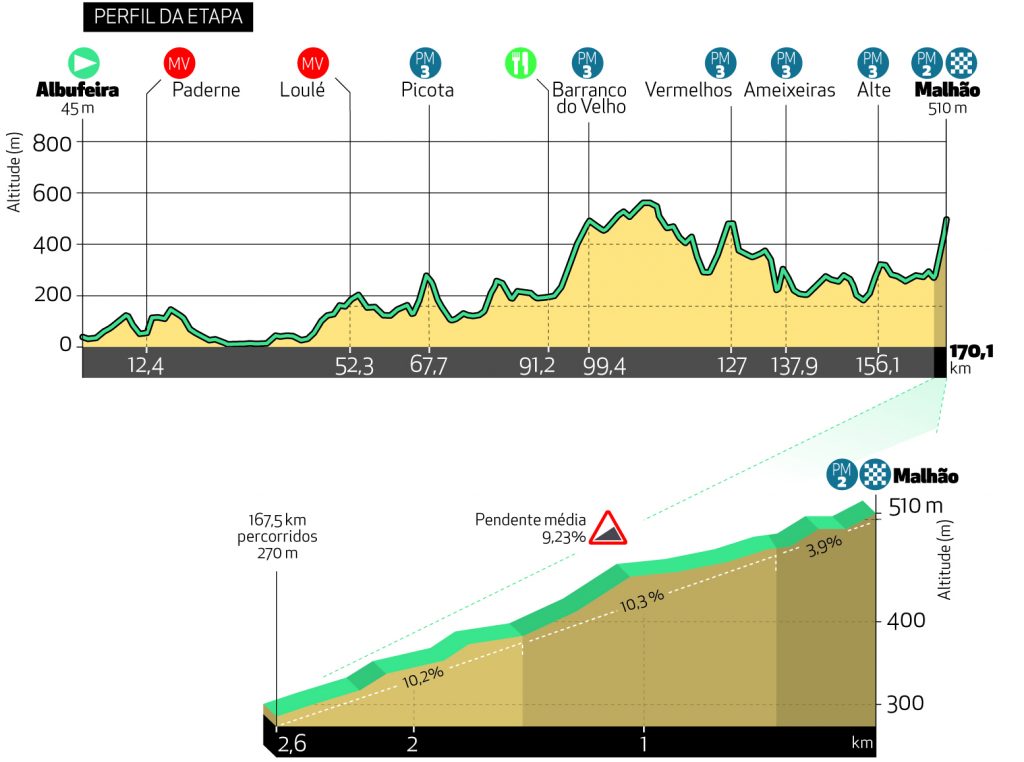 This stage has been one of great spectacle and has a recent victory by one of the man that is from Algarve: Amaro Antunes. The W52-FC Porto cyclist won in 2017, but this time the attention among the portuguese will focus on his teammate, João Rodrigues. He is also from the Algarve and knows the climb very well, having an opportunity to win a race that has not been won by a portuguese cyclist since 2006. He has 12 seconds to recover.

Hayter may have a time advantage, but the crash in the time trial has left a question mark as to his physical condition. Ineos is looking for another victory at Volta ao Algarve, after having seen Richie Porte, Geraint Thomas and Michal Kwiatkowski win, then under the name Sky. However, given the short differences, Hayter could suffer attacks, with Kasper Asgreen (Deceuninck-QuickStep) – winner of the time trial – to be 21 seconds behind and Thibault Guernalec (Arkéa Samsic) 22.