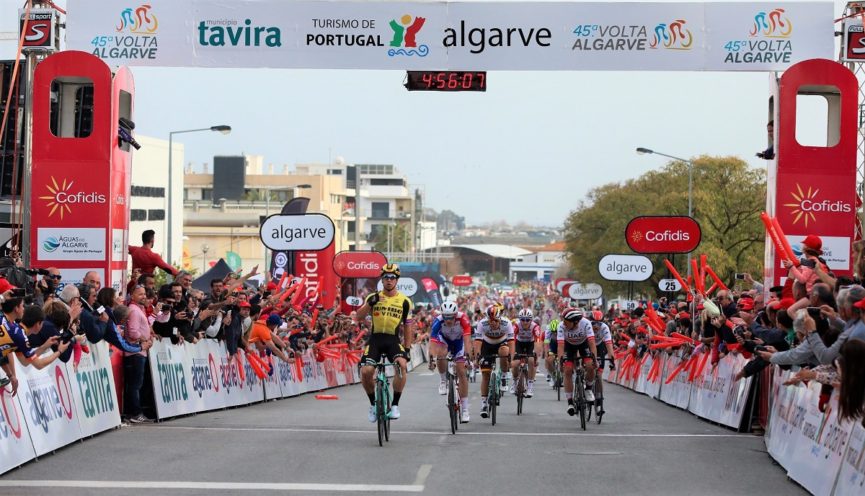 The Dutchman Dylan Groenewegen (Team Jumbo-Visma) won today, with authority, the fourth stage of the Volta ao Algarve. The Slovenian Tadej Pogačar (UAE Team Emirates) kept the yellow jersey, although he lost 7 seconds in the general classification.
Dylan Groenewegen was delayed due to a mechanical problem, about 5 kilometres from the finish line. Helped by his team, the Dutchman returned to his position and won for the second time in a row in Tavira.
Dylan Groenewegen took off at 200 metres from the finish line and imposed himself with authority after 198,3 km. Frenchman Arnaud Démare (Groupama-FDJ) entered the last meters poorly placed and sprinted from the rear, finishing in second place. The third was the young Belgian prodigy Jasper Philipsen (UAE Team Emirates).
“In the final part I had some mechanical problems, but the team quickly brought me to the front of the peloton. My colleagues were excellent at the sprint launch, it was a real black and yellow train that we saw here today. If we do the same in all races I think we will get along very well. It’s always a joy to win. For a sprinter it is important to win and so I am very satisfied. I felt very strong at the end, but the credit goes to the team that positioned me very well. On the first day we had bad luck but today we made the difference. We worked the whole stage and I’m very proud. I like racing in the Algarve very much, it’s always a crowded race and many are Dutch, it’s a very nice race”, said Dylan Groenewegen.
Unexpectedly, the fight for the Yellow Jersey Turismo do Algarve also went through today’s stage. Badly placed on arrival, Slovenian Tadej Pogačar was caught in the 7-second “cut”, as was Spanish Enric Mas (Deceuninck-Quick Step). The UAE Team Emirates youngster remained in charge, but saw the Danish Søren Kragh Andersen (Team Sunweb) rise to second place, reducing the gap to 29 seconds. The third is Wouter Poels (Team Sky), now 30 seconds away. Enric Mas went down to fourth with 31 seconds.
“Today was a normal day and the team [UAE Team Emirates] kept everything under control. I am very confident and motivated. Only later will we decide our strategy, but surely we will work and do everything in our power to defend the lead. Tomorrow we will face a lot of climbs before the end and every kilometre will count. We will have to be very careful, but the decisive moment will be the final climb,” said Tadej Pogačar.
The stage was boosted by the attack of Luís Fernandes (Aviludo-Louletano), Nikolay Mihaylov (Efapel), Jesús Nanclares (Miranda-Mortágua), Fábio Costa (UD Oliveirense/InOutBuild) and Oscar Pelegri (Vito-Feirense-PNB), which faded in the last 20 kilometers.
The tension of the final kilometres was overcome without accidents and the thousands of spectators from Tavira watched a phenomenal sprint.
Tadej Pogačar goes to the final stage in possession of the Yellow Jersey Turismo do Algarve. The Slovenian is also the leader of the mountains classification (Águas do Algarve) and the best youngster of the race. The Frenchman Arnaud Démare is the owner of the Red Cofidis jersey, the leader of the points classification.
The Volta ao Algarve ends this Sunday with the fifth stage, with 173,5 km. The start is in Faro, at 12h30, and ends at the top of Malhão, municipality of Loulé, about 17h00, in the second ascent to that already mythical climb of Portuguese cycling.
Algarve Granfondo Cofidis
In addition to the expected crowd to support the riders in Malhão, Sunday will also be the day of a major popular event, the Algarve Granfondo Cofidis, which will bring together 870 amateur cyclists. It will be an open race with departure and arrival in Loulé.
This initiative has a solidarity character, since Cofidis will offer a tree for each participant. In this way, 870 trees will be offered to help reforest the Monchique mountains, affected by the fires of 2018.
Return to the inclusive Algarve
The last stage of the Volta ao Algarve features a paracycling demonstration for the blind. Four visually impaired people leave will leave in front of the peloton, in tandem. One of the guides will be the president of the Portuguese Cycling Federation, Delmino Pereira.
Results