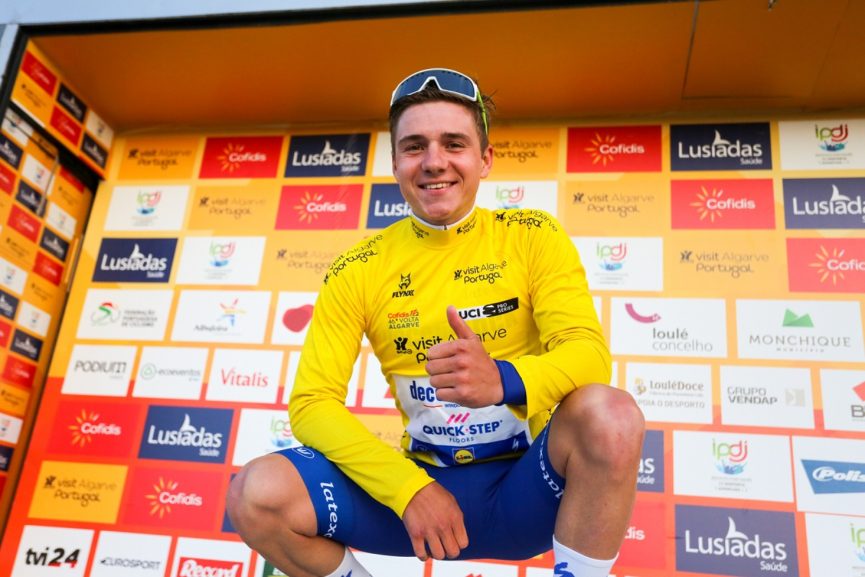 The Belgian Remco Evenepoel (Deceuninck-Quick-Step) won the Yellow Jersey Visit Algarve of the 46th Volta ao Algarve Cofidis today, after triumphing in the second stage, 183.9 km, between Sagres and Fóia, where the finish coincided with a first category climb.
The Belgian prodigy, 20 years old, made a perfect race, helped, in the decisive moments, by the young Portuguese João Almeida, who set the pace in the group of favourites in the last two kilometers, ensuring that the team leader had conditions to attack with the goal in sight.
After UAE Team Emirates imposed a strong pace and Astana Pro Team tried to start from the group of candidates, Simon Geschke (CCC Team) unleashed an attack at 2500 meters from the finish, cancelled by João Almeida. The portuguese rider kept a strong pace, preventing further movement, until, 300 meters from the end, where Remco Evenepoel attacked for the victory.
The Belgian cut the risk with 4h46m38s, beatting the German champions Maximilian Schachmann (Bora-hansgrohe), who recovered and almost managed to win the stage.The third, at 2 seconds, was the Irish Daniel Martin (Israel Start-Up Nation).
At the top of the GC is Remco Evenepoel, with the same time as Maximilian Schachmann. Rui Costa (UAE Team Emirates), fourth in the stage, is third in the overall, 2 seconds away from the captain, as are Daniel Martin and Tim Wellens (Lotto Soudal), fourth and fifth respectively.
Besides the yellow jersey, Remco Evenepoel owns the IPDJ White Jersey, for the best youngster, and the Lusíadas Blue Jersey, for the best climber. Fabio Jakobsen (Deceuninck-Quick-Step) holds the Red Cofidis Jersey from the points. Astana Pro Team is the leader of the team general classification.
Before the decisions on the mountain, Michael Schar (CCC Team), Casper Pedersen (Team Sunweb) and Dries de Bondt (Alpecin-Fenix) showed up, and formed the breakaway of the day, right at kilometer 12. The squad gave them a short rein, not letting the difference reach the three minutes.
W52-FC Porto were responsible for setting the groups’ pace throughout most of the day, but the UAE Team Emirates took the chase, with a harder ride at the entrance to the final 40 kilometres, making it clear that the breakaway was doomed, which would be confirmed 20 kilometres from the finish line.
The UAE Team Emirates continued their hardening on the short but the very steep climb of Pomba, drastically reducing the peloton, making the first selection for the show that would be seen on the climb to the highest point in the Algarve.
After the mountain, tomorrow it is expected that the lead will return to the sprinters, on the longest journey of the race. The third stage will connect Faro (11h50) to Tavira (17h00), over 201,9 kilometres. The riders will find sprints in São Brás de Alportel (km 18.4, 12h31), Alcoutim (km 64.9, 15h20) and Vila Nova de Cacela (km 190, 16h36) and two third category mountain prizes, Portela da Corcha (63.4, 13h35) and Cachopo (km 78.3, 13h56).
“We knew that the last 1.5 kilometres of the climb could be decisive because of the wind, so our mission was to keep up the pace of the climb and look for an opportunity to attack at the end. The team protected me well, my colleague João Almeida left me in good position and I attacked confidently in the last 300 meters.
Winning makes you happy but in life there are more important things. The son of my team-mate Nikolas Maes died recently and so my victory is entirely dedicated to him. The race tomorrow has a new opportunity for Fabio Jakobsen and that is now our next goal before Malhão and the final time trial.” – Remco Evenepoel
RESULTS