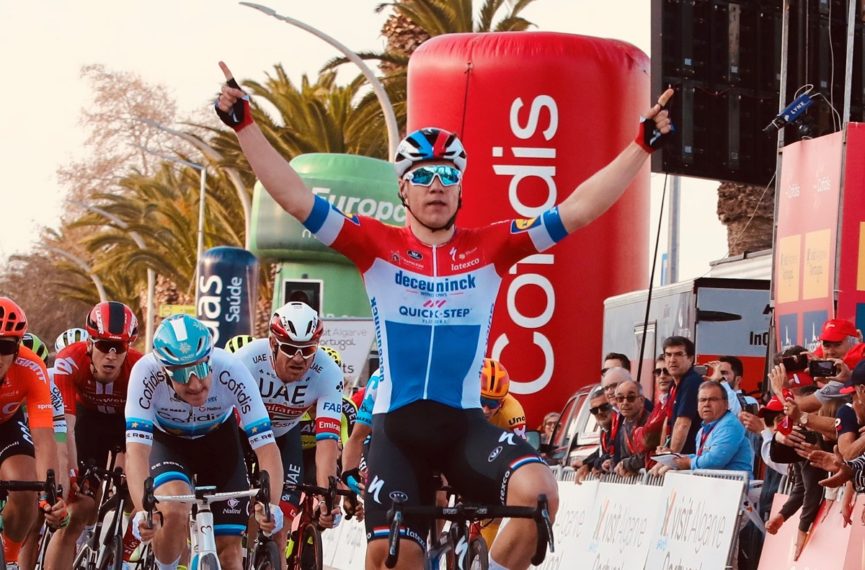 Dutch champion, Fabio Jakobsen (Deceuninck-Quick-Step), won the first stage of the 46th Volta ao Algarve Cofidis today, a 195.6 km route between Portimão and Lagos.
The animation started right from kilometer 5, when a trio decided to leave the peloton. Diego López (Fundación-Orbea), Alvaro Trueba (Atum General-Tavira-Maria Nova Hotel) and Pedro Paulinho (Efapel) were the first escapees in this races’ edition, but the main group kept them at a manageable distance. The Basque teams’ rider took advantage of the initiative to guarantee the first place on the podium as the owner of the Lusíadas Blue Jersey, given to the best climber.
The work of the teams with interest in a sprint finish ended with the breakaway 32 km from the end. When a calm approach to Lagos was expected, some big names in the peloton tried to speed up the races’ rythm. Philippe Gilbert and Tim Wellens (Lotto Soudal), Remco Evevenpoel (Deceuninck-Quick-Step) and Vincenzo Nibali (Trek-Segafredo) were among the attackers, but the main group managed to stay compact until the finish, in Lagos.
In the sprint, in front of thousands of spectators, Fabio Jakobsen won for the second consecutive year, in Lagos, benefiting from a better race reading than his rivals. The Dutchman delayed the final start close to the finish line and, when he “fired” his attack, gave no chance to his strong competition. In the immediate positions, with the same 4h55m37s of the winner, was a group of world sprint stars, such as Elia Viviani (Cofidis), Matteo Trentin (CCC Team) and Alexander Kristoff (UAE Team Emirates).
Fabio Jakobsen is now the owner of the Visit Algarve Yellow Jersey, leading the individual general classification, with the same time as the rest of the peloton. The Dutchman also has the Cofidis Red Jersey, of the points general classification. The best youngster, Colombian Juan Fernando Calle (Caja Rural-Seguros RGA), won the IPDJ White Jersey. Israel Start-Up Nation is the best team.
“The race wasn’t the toughest, but when Tim Wellens attacked, I made an effort to stay in the group. For the last 20 kilometres the pace has never gone down and I was glad the team put me in a good position here in Lagos. The last 700 metres were in a straight line and I knew that if I felt good I could win. I love Lagos and I’m happy with this victory. On Friday, there will probably be another sprint finish. In the team we have some riders for the mountain stages and of course Remco [Evenpoel], with the time trial, will try to make a good overall ranking,” said Fabio Jakobsen after the stage.
The first decisions on the fight for the overall classification are expected for this Thursday, day of the second stage, with 183.9 kilometers, between Sagres and the Alto da Fóia. The 7.5 kilometers of the first category final climb, are preceded by the mountain prizes of Marmelete (3rd cat., km 48.9, 13h29), Alferce (3rd cat., km 162.3, 16h11) and Pomba (2nd cat. km 170.2, 16h23). Pomba and Fóia may be an invitation to attacks from afar, aiming to distance the ITT specialists.
COMPLETE RESULTS