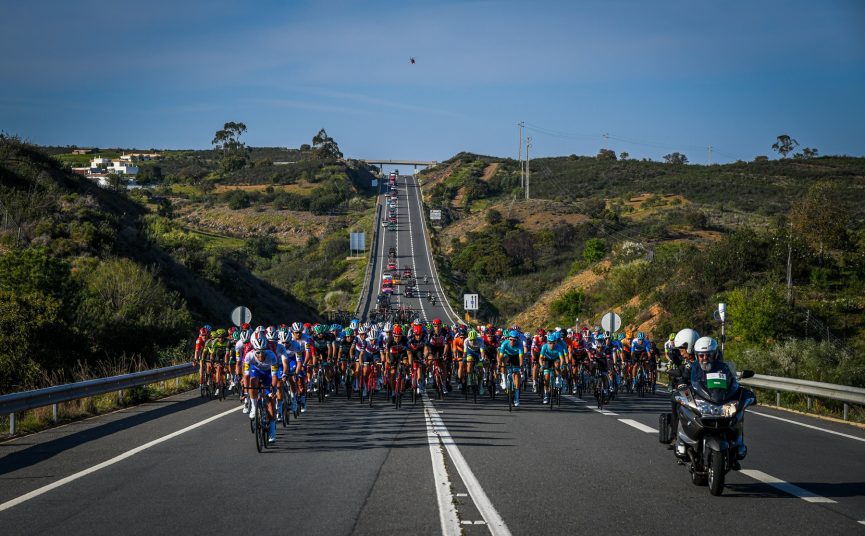 The 47th Volta ao Algarve, on the road from May 5th to 9th, will have a high-quality peloton. There will be 25 teams taking part, seven of which are WorldTeam, eight ProTeam, and ten from the Continental category.

Among the teams visiting the Algarve are the two best in the teams world ranking, the Belgian Deceuninck-Quick-Step, and the British Ineos Grenadiers. Also taking part will be the world number five, UAE Team Emirates, and the sixth-highest ranked, German Bora-hansgrohe.

French AG2R Citroën Team returns to the Volta ao Algarve after an eight-year absence from the Portuguese race. The WorldTeam line-up is completed by two teams that are a regular presence on the Algarve roads, the French Groupama-FDJ and the Belgian Intermarché-Wanty-Gobert Matériaux.

Spanish cycling will be represented by the country’s four ProTeams, Burgos-BH, Caja Rural-Seguros RGA, Equipo Kern Pharma and Euskaltel-Euskadi. From France arrive two teams of the same level, Delko and Team Arkéa-Samsic. The Belgian Bingoal Pauwels Sauces WB and the American Rally Cycling are also among the ProTeams invited.

The Volta ao Algarve will be an opportunity for Portuguese teams to measure forces with the international ones in a ProSeries race. Therefore, the nine Continental blocks of the country are participating: Antarte-Feirense, Atum General-Tavira-Maria Nova Hotel, Efapel, Kelly-Simoldes-UDO, LA Alumínios-LA Sport, Louletano-Loulé Concelho, Rádio Popular-Boavista, Tavfer-Measindot-Mortágua and W52-FC Porto.

The peloton is completed with a Continental team from abroad, but with great importance for Portuguese cycling, the American Hagens Berman Axeon, the doorway to international cycling for many of the Portuguese who today are thriving in the WorldTour, such as João Almeida, Rúben Guerreiro and the twins Ivo and Rui Oliveira. The team led by Axel Merckx presents itself in the Algarve with the two Portuguese that take part in the 2021 squad, Diogo Barbosa and Pedro Andrade.

Usually held in February, in 2021 the Volta ao Algarve had to be postponed to May, due to the SARS-CoV-2 pandemic. In these two periods of the year, the dynamics of the teams are different in terms of calendar management and the Volta ao Algarve only had confirmation of the date on 18 March. Despite this, the prestige gained in previous editions allowed a range of high-quality teams to still be attracted to the race. Once again, it was not possible to welcome all the teams of the three international categories of the sport that had shown interest in participating in the race.