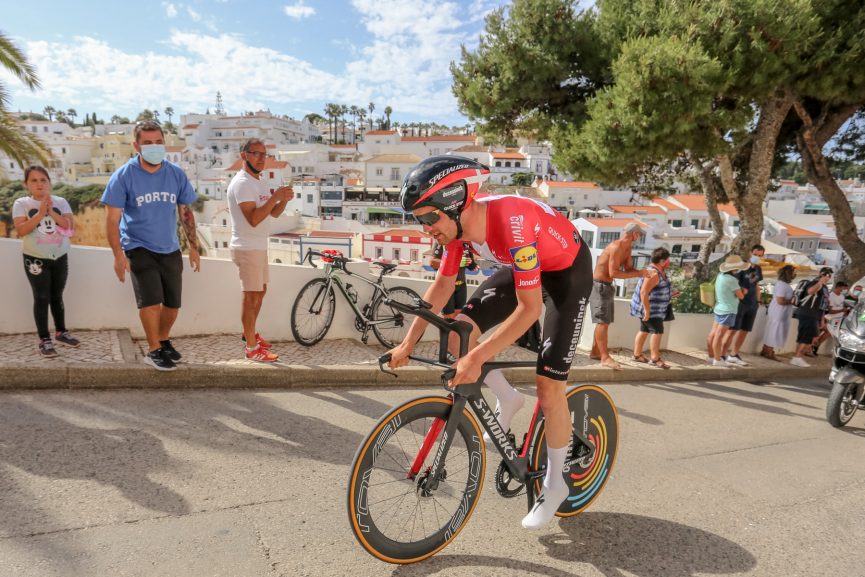 Deceuninck-Quick Step is thriving, with Kasper Asgreen winning todays’ time trial. The Portuguese Rafael Reis came down in second, in front of Benjamin Thomas. Ethan Hayter was ninth and was able to keep the yellow jersey despite a crash.

The riders went to the time trial in Lagoa with last years’ record in mind. The one to do it was the race winner, Remco Evenepoel (Deceuninck-Quick Step), who did 24m07s.

Benjamin Thomas (Groupama-FDJ) was the first one to get to the hot seat for a good amount of time, beating Remcos’ time by six seconds. The Portuguese Ivo Oliveira (UAE Team Emirates) gave all he had, but it fell short for the lead, with a time of 24m29s, which for that moment guaranteed the second-best mark.

However, another Portuguese rider was about to leave everyone amazed, beating Thomas’s time and dropping down from the 24-minute mark. With this, Rafael Reis (Efapel) ended up on the hot seat with a time of 23m55.

Two wins in three days were not enough for Deceuninck-Quick Step, and the Danish ITT national champion, Kasper Asgreen, went for the third on the time trial, beating Reis by only three seconds.

The race leader, Ethan Hayter (Ineos Grenadiers), was the last one to start and had by far the best intermediate mark. However, a crash threw away the chances for a win in Lagoa’s time trial. Despite the crash, he went back on the bike to finish ninth (24m54s) and still kept the Turismo do Algarve yellow jersey.

João Rodrigues (W52-FC Porto) was 11th on the stage and has a gap of only 12 seconds to the leader. Rodrigues still holds on to the Lusíadas Blue Jersey, as well as Sam Bennett (Deceuninck-Quick Step), with the Crédito Agrícola Green Jersey and Sean Quinn (Hagens Berman Axeon), with the IPDJ Youth Jersey.

The last stage tomorrow, with a climb to Alto do Malhão, will decide who is going to win the 47th edition of Volta ao Algarve, as Kasper Asgreen is back on the fight for the yellow Jersey, 22 seconds from the leader.