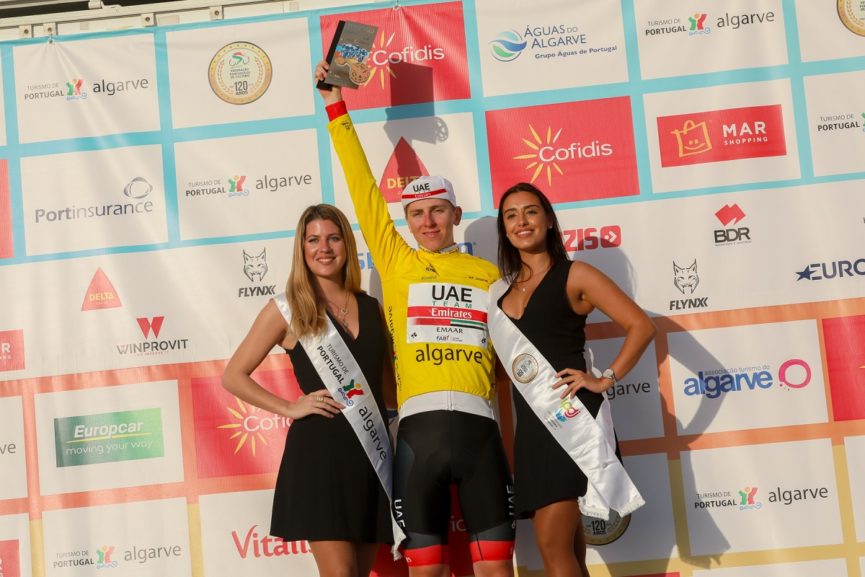 The Slovenian Tadej Pogačar (UAE Team Emirates) won today the 45th Volta ao Algarve, fighting all the attacks he suffered in the last strecht going to the top of Malhão.  Czech Zdeněk Štybar (Deceuninck-Quick Step) won the final stage.
The final 40 kilometres of the stage were electrifying, full of emotion and consistent attacks, which valued the final triumph of the 20 year-old Slovenian. Denmark’s Søren Kragh Andersen (Team Sunweb) set off for the final stage in second place, just 29 seconds from the commander.
After the first pass at Malhão, where Team Sky and Team Sunweb decimated the squad with a violent pace, Søren Kragh Andersen tried to seize the Yellow Jersey Turismo do Algarve. The Nordic rider started his attack on the way up to Vermelhos Climb, 22 kilometres to the finish. He was accompanied by Zdeněk Štybar, Stephen Cummings (Team DImension Data) and David de la Cruz (Team Sky), but it was Søren Kragh Andersen who took most of the work, allowing him to enter the final climb to Malhão 1’20” ahead of the group of candidates.
The final climb left only Søren Kragh Andersen and Zdeněk Štybar at the front but the interest of the race was behind, where the attacks followed, signed by people like Amaro Antunes (CCC Team), Wouter Poels (Team Sky) or Enric Mas (Deceuninck-Quick Step), to whom Sam Oomen (Team Sunweb) was responding as he could, in defence of Kragh Andersen.
The movement of the favourites was able to bring the group behind the head of the race. Showing a surprising maturity for the 20-year-old, Tadej Pogačar did not shudder at the absence of team-mates nor did he go into shock at rival onslaughts. His cool-headedness allowed him to hold on to the Turismo do Algarve yellow jersey, not least because his most dangerous opponent, Søren Kragh Andersen, paid the price for his boldness and faded in the front.
Zdeněk Štybar cut the finish line with time to celebrate his first win ever in Algarve. Søren Kragh Andersen spent another 3 seconds and Wouter Poels, coming from behind, was third 9 seconds away.
“It is the third year that I attack in this stage of Malhão. Last year I was also in good shape but I was blocked in the last meters. This time it went much better, I managed to win and that, in terms of confidence, makes a big difference. This triumph is the confirmation of the work in winter. The form is there, and now I hope to enjoy it in the next races and be well in the Classics season,” said Štybar.
Tadej Pogačar was the sixth, at 18 seconds, succeeding Michal Kwiatkowski as the winner of the Tour de l’Algarve. The UAE Team Emirates rider is the second Slovenian cyclist to reveal himself to the world of cycling in the Portuguese race, after Primož Roglič win in 2017.
The new hero of the Volta ao Algarve won his first race with a  WorldTour team, spending 19h26m34s to complete the five stages. In the General classification Søren Kragh Andersen was second at 14 seconds and Dutchman Wouter Poels closed the podium at 21 seconds.
“When I crossed the line I didn’t know the difference. They told me I had won and I can’t describe how happy I felt. Thanks to my team for helping me win. My colleagues pulled in front of the squad during the whole stage and I didn’t want to disappoint them. The stage was very fast and especially nervous in the last 50 kilometres. It was difficult to be patient and not respond directly to my opponents’ attacks in the final half, but my colleagues were strong and I put all my trust in them. After this triumph I will reset and focus again on what the team will ask of me. It is spectacular to repeat Primož’s victory Roglič and become the second Slovenian to win in the Algarve. Cycling in Slovenia is growing and we will certainly see more Slovenes in the WorldTour. I enjoyed running in the Algarve. This victory will be in my memory and I hope to come back more often”, said the winner.
All classifications were won by the WorldTour teams. Tadej Pogačar added youth jersey to the individual general classification, German champion Pascal Ackermann (Bora-hansgrohe) took the red Cofidis jersey for the points, and Belgian Tim Declercq (Deceuninck-Quick Step) took advantage of today’s escape to take care of the blue Águas do Algarve jersey as best climber. Team Sky won the Teams Classification.
Results

We love to see him wearing the yellow jersey of the Volta ao Algarve. But we must recognise that the rainbow also suits him very well. Congratulations, Remco Evenepoel!

The top four finishers in the time trial of the Volta ao Algarve 2022 were today the top four in the World Championship, although in a different order. Congratulations to all of them, especially to the new world champion, Tobias Foss!

Congratulations, Remco Evenepoel! The winner of the Volta ao Algarve in 2020 and 2022 has just won the Volta a España, first victory in three-week races of his career.