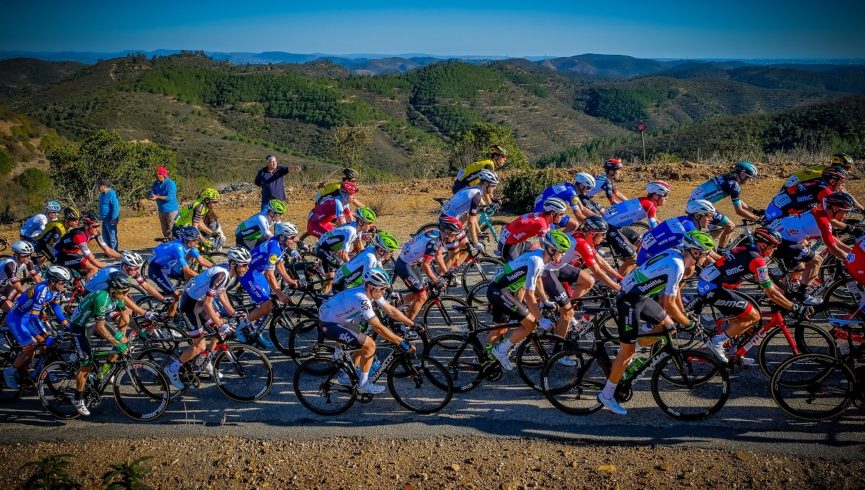 The 45th edition of the Volta ao Algarve, the Portuguese 2.HC race,  will start in Portimão on February 20 and finish at the top of Malhão, a steep second category on February 24.
The route is similar to the previous years offering stages for all kind of cyclists along the 778,6 km with more than 12.000 meters of total elevation gain.
The start will be in Portimão, 2019 European City of Sport, which has not received the competition since 2012. It will the longest stage of the race, with 199.1 kilometers to Lagos. It is expected to be a sprint finish, in the same place where, in the last two years, Fernando Gaviria and Dylan Groenwegen won.
The second stage begins in Almodôvar and ends at the highest point of the Algarve, the Fóia, in the municipality of Monchique. The riders will face 187.4 kilometers with an elevation gain of 3600 meters. The finish line coincides with a first category mountain where, in recent years, Daniel Martin and Michal Kwiatkowski triumphed. The arrival at Fóia will be made by a climb with 8 kilometers of extension and an average gradient of 6.3 percent.
The Volta ao Algarve still as an important spot for the time trialists try their new bikes. The third stage will be an individual time trial of 20.3 kilometers, with start and finish in Lagoa. The route is the same used in 2018, when Geriant Thomas imposed his strength.
The sprinters will have a new opportunity on the fourth day, with a 198.3 kilometers travel between Albufeira and Tavira. Similar to what happened in the last two years, when André Greipel and Dylan Groenewegen won in front of thousands of spectators.
The Volta ao Algarve will end at the top of Malhão, in the municipality of Loulé. The fifth and final stage will have 173.5 kilometers, starting from Faro and arriving at Malhão. The finish line coincides with a second category mountain, a short but very demanding climb – 2.5 kilometers with an average slope of 9.9 per cent – where, over the last two years, Amaro Antunes and Michal Kwiatkowski prevailed.
The route brings all the ingredients in order to the Volta ao Algarve continue as one of the best stage races in the World and one of the events with the highest quality in the context of all Portuguese sport.
Stages
February 20 – 1st Stage: Portimão – Lagos, 199,1 km
February 21 – 2nd Stage: Almodôvar – Fóia, 187,4 km
February 22 – 3rd Stage: Lagoa – Lagoa, 20,3 km (ITT)
February 23 – 4th Stage: Albufeira – Tavira, 198,3 km
February 24 – 5th Etapa: Faro – Malhão, 173,5 km
Previous winners of the Volta ao Algarve
2018 – Michal Kwiatkowski (Team Sky)
2017 – Primoz Roglic (Team Lotto NL-Jumbo)
2016 – Geraint Thomas (Team Sky)
2015 – Geraint Thomas (Team Sky)
2014 – Michal Kwiatkowski (Omega Pharma-QuickStep)
2013 – Tony Martin (Omega Pharma-QuickStep)
2012 – Richie Porte (Sky)
2011 – Tony Martin (HTC-Highroad)
2010 – Alberto Contador (Astana)
2009 – Alberto Contador (Astana)