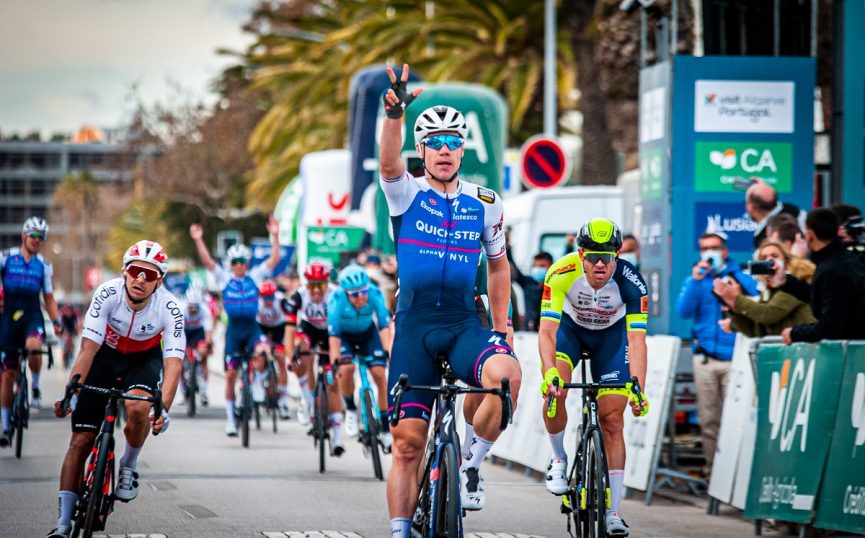 Number three! Fabio Jakobsen starts to assume himself as the king of sprints in Lagos. Third victory for the dutchman, after another overwhelming sprint by this cyclist, who is simply not giving the competition a chance. That’s three wins in the Algarve (after 2019 and 2020), that’s three wins in the season. Quick-Step Alpha Vinyl had another cyclist on the podium, as Remco Evenepoel is the best youngster, he who is in the 48th edition of the Volta ao Algarve to try to win the race for the second time.

In other words, the belgian team has the Yellow Jersey Turismo do Algarve and the Green Crédito Agrícola (points) with Jakobsen and the White IPDJ with Evenepoel. Quick-Step Alpha Vinyl really likes to wear the jerseys in the Algarve! Blue Jersey Lusíadas is with a portuguese rider. João Matias (Tavfer-Mortágua-Ovos Matinados) was one on the getaway and took the opportunity to secure the lead in the mountain classification, thus having a place in the podium.

Jakobsen said he has a “perfect team” and had a special word for Evenepoel: “A big thanks to Remco. He’s here for the general classification, but he did a perfect job in the sprint preparation.” The dutchman thanked all his teammates, as “a sprinter cannot win without them”.

He also highlighted how there are no secrets for him in the sprint in Lagos: “I’m happy to win again here in Lagos. I know this place very well. We did a training camp here and I had already won here twice.”

Two crashes in the final part of the stage

The 199.1 kilometers of the first stage, which started in Portimão, seemed to be going as expected. Four riders escape, while in the peloton a belgian alliance took over the expenses to ensure that everything was in control for a sprint finish. Quick-Step Alpha Vinyl, Intermaché-Wanty-Gobert Matériaux and Alpecin-Fenix ​​- all teams from Belgium with strong sprinters – took turns setting the pace.

Asier Etxeberria (Euskaltel-Euskadi), Fábio Oliveira (ABTF-Feirense), Hugo Nunes (Rádio Popular-Paredes-Boavista) and João Matias (Tavfer-Mortágua-Ovos Matinados) were many kilometers ahead, until 35 from the finish.

João Matias won the battle for the blue jersey, being second in the fourth category of Aldeia dos Matos (39.1 kilometers) and first in the third category of Nave (97.8).

Matias also won the intermediate sprint in S.B. Messines (54.6 kilometers), while Hugo Nunes was the strongest in Aljezur (128.3) and Vila do Bispo (162.7). However, the winner of the stage is the leader of the points classification, although this Thursday Jakobsen “loans” the Green Jersey Crédito Agrícola to Bryan Coquard (Cofidis), as he will be in yellow.

However, 38.5 kilometers from the finish line, a crash started to change a bit the history of the stage. The peloton broke, with the portuguese teams being the most affected. Many cyclists were left behind. At about 12 kilometers to go, another crash. As a result, the leading group was small, despite having the majority of the main candidates for victory both in the stage and among those who want to fight for the overall.

Alexander Kristoff (Intermaché-Wanty-Gobert Matériaux) was third after the disqualification of Jordi Meeus. The Bora-Hansgrohe rider did an irregular sprint. The best portuguese was Rui Oliveira (UAE Team Emirates), finishing in fifth position.

This Thursday is the day of the climb to Alto da Fóia, in the Serra de Monchique. 182.4 kilometers, starting in Albufeira and will be an important test for climbers who may not adapt so well to the long time trial on Saturday. Therefore, with the ascent of Picota before, there will be two long consecutive ascents, with Fóia being first category.

Remco Evenepoel won there in 2020 and ended up taking the overall. Ethan Hayter won Fóia last year and could be one of the many cards Ineos Grenadiers can play.