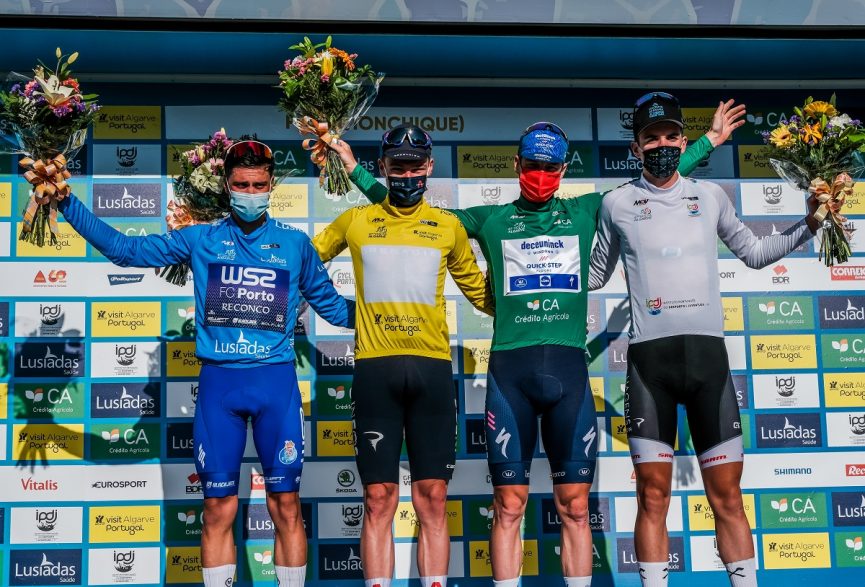 The second stage of the Volta ao Algarve departed from Sagres to a 182,8-kilometer course to the famous Alto da Fóia, which already witnessed great wins in the past, with Tadej Pogacar, in 2019, and Remco Evenepoel, in 2020.

The breakaway of the day was composed of eight riders for most of the stage, but only Damien Touzé (AG2R Citroën Team), Kenny Molly (Bingoal Pauwels Sauces WB), and Samuel Caldeira (W52-FC Porto) held on until the climb in Alferce, about 30 kilometers from the finish.

Back in the peloton, UAE Team Emirates was leading the way to stop Samuel Caldeira and his impressive pace at the head of the race. However, the teams’ big hopes to win the stage with Rui Costa ended when there were only 20 kilometers left after he crashed. The riders in front were soon caught by the main group.

Soon came a difficult second category climb to Pomba, where only around 20 riders resisted to form a small group in the front. Here, Kasper Asgreen (Deceuninck-Quick Step) was taking the lead.

When the riders started the final climb to Fóia, the attacks began as no one was willing to set the pace.

When the final attack to the finish took place, in the last few hundred meters, Ethan Hayter was the strongest, leaving behind João Rodrigues (W52-FC Porto) and Jonathan Lastra (Caja Rural-Seguros RGA).

Hayter is now wearing the Turismo do Algarve Yellow Jersey as the leader of the Volta ao Algarve. The Crédito Agrícola Green Jersey is still on Sam Bennett (Deceuninck-Quick Step), João Rodrigues has the Lusíadas Blue Jersey, for the mountain, and Sean Quinn (Hagens Berman Axeon) is now wearing the IPDJ White Jersey.

Are you ready for the 48th edition of Volta ao Algarve? As usual, we'll have five stages: two sprint finishes, two top finishes and one individual time-trial. As for next years' route, we're now taking care of the final details. Stay tunned, as the announcement will be made soon!

você tem datas ainda? Do you have dates yet?

Looking forward to February....Volta Algarve come on down....