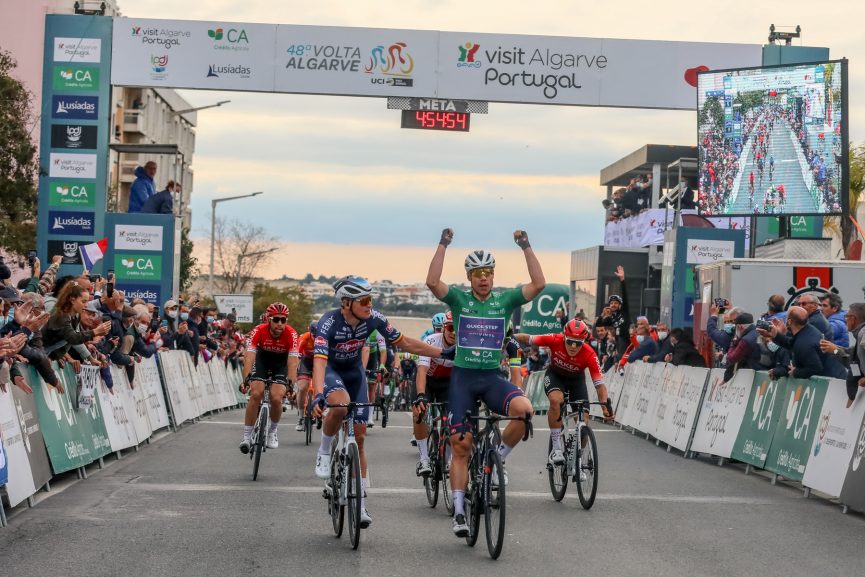 Longest day in the 48th edition of Volta ao Algarve. There were 211.4 kilometers from Almodôvar to Faro, in a different finish than in recent editions, but with a spectacular sprint that gave Fabio Jakobsen (Quick-Step Alpha Vinyl) the another victory in these stages that suited him so well. Two sprints, two triumphs in which he didn’t give the competition a chance.

After Lagos in the first stage, it was in the district capital that the Dutchman raised his personal tally in this race to four victories, in all his participations.

“The team did a perfect job, especially Kasper Asgreen, who protected me throughout the stage. Often that’s what counts. In the last two kilometers we were always in front, in the top ten. The home straight had 400 meters, launched my sprint in the last 200 and pushed until I won”, said the sprinter.

He added: “Bryan Coquard, he is a sprinter who does well in these finishes, he started at the same time, but I had stronger legs. I even saw Tim Merlier approaching but he couldn’t pass me on the left and I’m happy I won here in Faro.”

While the cyclists who are going to have an intense weekend fighting for the general classification had a stage in which they were forced to be attentive and avoid any mishap that would make them lose time, the sprinters’ teams were in action to ensure that the breakaway with seven riders was never a danger. Groupama-FDJ always kept David Gaudu, holder of the Yellow Jersey Turismo do Algarve, well placed.

The rider from the Algarve team was also first in intermediate sprint at Restaurante Alpendre, with Rafael Silva and Samuel Caldeira winning in Almodôvar and Alcoutim, respectively.

However, it was on the climb, also in a fourth category, of Bengado, that the first relevant move was seen. Tavfer-Mortágua-Ovos Matinados took charge of the peloton that until then was commanded by either Alpecin-Fenix, Quick-Step Alpha Vinyl and Cofidis, teams with sprinters.

Purpose of Portuguese team? Nullify the escape and thus allow João Matias to be first in the moutain pass and regain the lead in this classification of the Lusíadas Blue Jersey, which he had lost in Fóia to Gaudu. And so it happened.

186.1 kilometers had passed. Afterwards, Fábio Costa and Afonso Eulálio (Glassdrive-Q8-Anicolor) and Hugo Nunes (Rádio Popular-Paredes-Boavista) tried to escape, but always with the peloton on their toes, at this stage also with Alexander Kristoff’s team, Intermaché-Wanty-Gobert Matériaux, helping with the chase. Faro was waiting for an arrival in the sprint, with the city not hosting a stage finally since 2008, when the German Robert Förster (Gerolsteiner) won.

It was an arrival on a straight with some slope. Nothing that bothered the man of the moment. Fabio Jakobsen is in unbeatable form and Tim Merlier (Alpecin-Fenix) – runner-up – immediately recognized this as he crossed the line, greeting the Dutchman.

This triumph also practically guarantees the points classification, with Jakobsen being the owner and master of the Crédito Agrícola Green Jersey. “Green is the color of the sprinters. I already wore this shirt in the Vuelta a España and I hope to win this classification if I can finish the day after tomorrow”, he said.

This Saturday, the long time trial between Vila Real de Santo António and Tavira (32.2 kilometers) will help define a completely open general classification. Gaudu is just a second ahead of six riders and the fourth stage favors the strongest men in this specialty. Sunday, it’s the day to go up to Malhão and meet the winner of the Volta ao Algarve.

It will not be easy for David Gaudu to maintain the lead: “It will be difficult to keep the yellow jersey in the time trial. I want to do the best I can. I worked a lot on my position and I hope to see some improvement. However, the team’s bet is Stefan Küng [two-time European champion in the specialty], let’s hope he can win. Riders like Remco (Evenepoel) or Brandon Mcnulty are faster, but I hope I still have something to say in the last stage.”