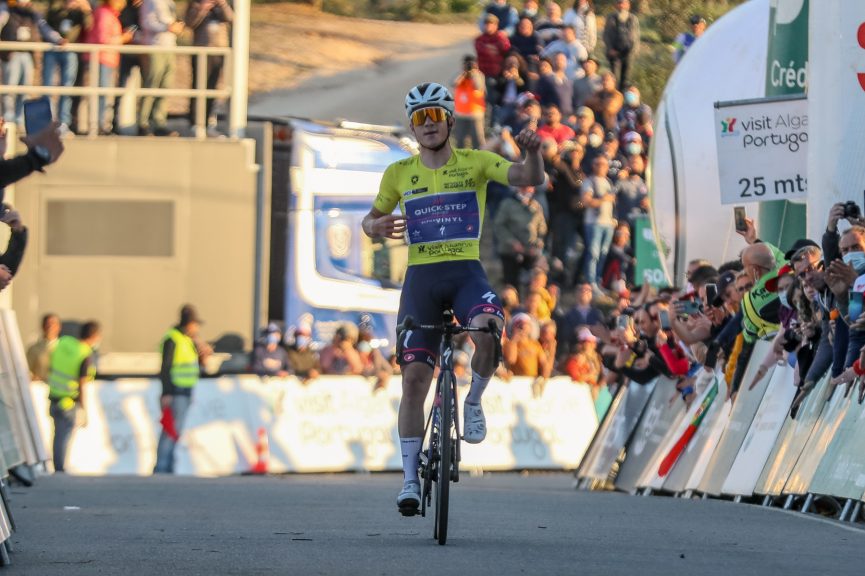 Remco Evenepoel won the Volta ao Algarve for the second time. It was a classy finish for the Belgian, in a race in which the Quick-Step Alpha Vinyl was close to perfection. In addition to the overall victory, it had sprinter Fabio Jakobsen big, which meant he won three of the four individual classifications and three of the five stages.

It has been traditional for this team to get a lot of success. Evenepoel joins a short list of riders who have won twice the overall, after having already surpassed all competition in 2020. He is only 22 years old and just keeps winning. Evenepoel took the Turismo do Algarve Yellow Jersey, but also the White IPDJ, symbol of the youth classification.

“I wanted to come back [to Algarve] do the same thing I did two years ago and I’m glad I did. I knew that this week the time trial was the most important thing. Yesterday [Saturday] I gave everything and today I still felt [the effort] in my legs. But as we approached the last climb, Louis [Vervaeke] and other teammates did a great job,” said the 2022 champion.

About the climb in Malhão: “I attacked, but I saw that they were still following. I realized that they were not going to attack immediately and decided to set a high pace until the final 200 meters.  I wanted to enjoy the yellow jersey, that’s why I celebrated a little at the finish line.”

The cyclist leaves the 48th edition of the Volta ao Algarve satisfied with the physical form he was able to demonstrate, having even claimed that he had done the best time trial of his career, in the fourth stage, a which he won. In Malhão he defended himself very well, as he had done in Fóia.

“The plan before the race was to survive in the mountain stages and in the time trial to win as much time as possible. I also did my work on the leadout for Fabio [Jakobsen], we won two stages. I won one and in the two stages of mountain I survived very well,” he explained.

Colombian Sergio Higuita (Bora-Hansgrohe) and Daniel Martínez (INEOS Grenadiers) sprinted for the stage, with the first winning and the latter securing a place on the podium, moving up to third overall.

UAE Team Emirates Brandon McNulty was second, 1:17 minutes behind Evenepoel, with Martínez closing the race at 1:21. Ehan Hayter (INEOS Grenadiers) was in second position before the stage, but dropped to fourth, thus not repeating the 2021 place. INEOS Grenadiers won the team classification.

Malhão did not disappoint

The last stage started in Lagoa, with 173 kilometers to cover up to Alto do Malhão, two intermediate sprints (Paderne and Loulé) and five mountain passes: Picota, Vermelhos and Alte (all third category), plus the double pass in Malhão (second category, with the last one coinciding with the finish line).

The day’s breakout had 20 riders, with the teams of all those still aspiring to take the lead from Remco Evenepoel represented, so they could later help the leaders. Only Dries de Bondt (Alpecin-Fenix) and Georg Zimmermann (Intermaché-Wanty-Gobert Matériaux) were still in the lead when they first passed Malhão.

However, in the fight for the general, Daniel Martínez started to attack the race early, trying to isolate Remco Evenepoel. A first sign, but which no other candidate tried to follow up. Yves Lampaert (who had been in the breakout) turned out to be a precious help for Evenepoel and the group had more riders entering close to the second climb to Malhão. But it didn’t take long to break again.

With less than three kilometers to the finish and with Evenepoel very comfortable, it became obvious that the other riders had to fight just for the stage victory. The yellow jersey was guaranteed.

Higuita had already been very well in Fóia. However, he crashed with the line in sight, in a touch with Tobias Foss (Jumbo-Visma). This time, everything went well for the Colombian champion.

“First of all, I want to dedicate this victory to the great-grandmother of my girlfriend, who died the day I fell [stage two]. To have the possibility of winning the stage, falling, arriving at the hotel and receiving this bad news… It’s a big blow. Today we left for the stage motivated to give our best and we got this victory. The team had difficult days in the Algarve. One of us fell and broke his collarbone, another got sick, but today we won”, said Higuita.

The Bora-Hansgrohe rider stressed that Evenepoel was strong: “I was thinking of attacking later, at 300 meters, but [Brandon] McNulty got ahead and, thankfully. I decided to wait for the last 100 meters to pass Daniel [Martínez]. I’m happy for this victory, especially after winning the championship in Colombia, eight days ago.”

Fabio Jakobsen held on to the Crédito Agrícola Green Jersey until the end. The two sprint victories, in Lagos and Faro, left him comfortable in the lead, but the Dutchman did not want to leave any doubts and in the second intermediate sprint of the day, in Loulé, he was third and closed the rankings. 51 points against Bryan Coquard’s 36 (Cofidis) and Alexander Kristoff’s 29 (Intermarché-Wanty-Gobert Matériaux).

On the mountain jersey, the battle was quite different. João Matias (Tavfer-Mortágua-Ovos Matinados, was part of the breakout to try to defend the Lusíadas Blue Jersey for which he fought so hard in this Volta ao Algarve. The three points he got (15 total) were enough to be the king of the mountain, leaving David Gaudu (Groupama-FDJ) in second place, with 12.