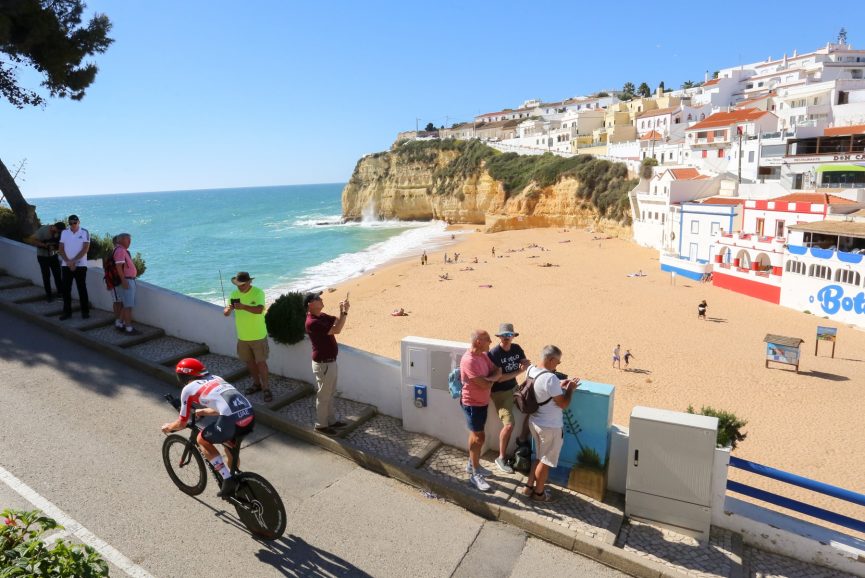 Weekend of decisions in Volta ao Algarve, with the time trial of Lagoa defining the time that will separate those who aspire to be on the final podium in Malhão as the winner of the 47th edition.

For three years, this city of Algarve has been the place where the specialist can show off their skills, facing 20.3 kilometers ahead, which include ascents, technical zones that require a break in pace and test the resistance of all.

The then time trial european champion, Remco Evenepoel (Deceuninck-QuickStep), won in 2020, on the day he secured the overall victory in the race. Stefan Küng (Groupama-FDJ) was the fastest the year befora, a swiss champion and has since become the european champion. Backing up yet another year, Geraint Thomas (Ineos – Sky at the time) showed why he is also one of the best in the peloton, even though he later saw team-mate Michal Kwiatkowski win the yellow jersey.

With the stage of Malhão promising some leg pains on Sunday, given the constant up and down, in what looks so much like a one day classic, in the candidates mind will be the need to win or at least not to lose much time, but knowing that you need to be physically well the next day. And there is one more factor to take into account: the wind may influence the performance of the cyclists.

Attention will inevitably focus on Ethan Hayter, the surprise at Fóia. The british youngster from Ineos is in yellow, but has the same time as the portuguese João Rodrigues (W52-FC Porto) and the spanish Jonathan Lastra (Caja Rural). Between first place and 19th – youth leader Sean Quinn (Hagens Berman Axeon) – there’s 48 seconds apart. From the 20th place, the barrier of at least one minute is passed.

Hayter has a background (and titles) on the track and presents itself as an all-rounder, capable of adapting to various terrains on the road. João Rodrigues is from the Algarve, so there is no course in this race that he does not know very well.

But when it comes to stage victory, there are some other candidates. Kasper Asgreen (Deceuninck-QuickStep) has the opportunity to re-enter the fight for the overall, having 44 seconds to recover. Nils Politt (Bora-Hansgrohe) also adapts well to the Lagoa route and was ninth in both 2020 and 2019 editions.

Then there are some very good young french riders, as is the case of Benjamin Thomas (Groupama-FDJ), Matis Louvel and Thibaut Guernalec (Arkéa Samsic), all of whom have already had good results this year.

And of course, from a Portuguese perspective, the focus will be on Ivo Oliveira (UAE Team Emirates), the national champion of the specialty.